Backcountry Notes Blog is a companion site to my home Web site, Backcountry Notes. It is intended (at present) to roughly parallel the Front Page of Backcountry Notes and its purpose is to permit better tracking and access for those who prefer Blogger. I am working through the differences in formats as I go (took me a while to get pictures to display properly, or at all), so forgive the occasional mess. Comments and helpful suggestion are welcome.

Jay Henderson
Richlands, Virginia, United States
I am an ex-urbanite who escaped the city life and has lived for the past 28 years in a rural, mountainous area of Virginia that in colonial and early-American times was part of the "Backcountry." This is the true melting pot of the U.S.A., its culture and traditions dominated by "born fighting" Scotch-Irish immigrants and enhanced by German, Highland Scot, Dutch, Welsh, and yeoman English settlers. Having absorbed and inculcated the history, values and views of the Backcountry, I would like to share insights, information, and viewpoints from the place where America began.

The annual Virginia Highlands Festival is held in Abingdon, Virginia, which provides a nice setting among the old buildings in downtown Abingdon. Part of the Festival is an antiques bourse which is housed in two huge tents on the grounds of the community college. These pictures were taken at the antiques show; next installment, the arts & crafts show downtown. You can click on any picture to bring up a larger version. 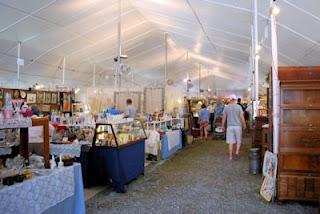 Posted by Jay Henderson at 3:13 PM No comments:

The following is from my friend Tom Evans, a distant kinsman through Clan Gunn, who hails from the Virginia Piedmont.

My father, sixth of the seven children of his family, was born in July, 1919, in a one-room log cabin on a rented farm near Wentworth in Rockingham County, North Carolina. A later owner of this land burned the cabin in the late 1960s to "get rid of that nuisance." It had stored farm tools for more than 30 observed years, before it was burned, and probably since the Evans family moved out of it.

Posted by Jay Henderson at 3:08 PM No comments:

Log cabin construction requires some sort of notching at the ends of the logs where they are to be stacked to form the corner joints of the "crib." The Scotch-Irish immigrants learned the craft of log construction from settlers who brought the techniques with them from Sweden and Finland. The Nordic cabin-builders used two very similar methods. The simpler method is the saddle joint, which needed few tools and but a little practice; the more complex method, fully-scribed saddle joints, required more tools and greater skill and was not used in the Backcountry. (Fully-scribed saddle joints bring the logs into full-length contact, eliminating the need for chinking.) Saddle notches could be cut with only an axe, a mallet, and a chisel. This greatly reduced the need to carry tools into the wilderness, which had great appeal to the Scotch-Irish who were moving rapidly into the Backcountry in the 18th century.

Posted by Jay Henderson at 3:04 PM No comments:

Map of Cumberland and Franklin

I have had the good fortune to find a digital version of Ramsey's Map of Cumberland and Franklin, published in 1853. The map depicts Tennessee during the time of settlement, when it was the frontier of the Backcountry. It shows the road, named "Robertson's Route," leading southwest from the Wilderness Road (from Virginia to central Kentucky) into Middle Tennessee. Two areas of settlement are illustrated: Northeast Tennessee, lying between the Great Smokies and the Cumberland Mountains; and upper Middle Tennessee, accessed by way of Robertson's Route. In between these areas there was no settlement in early Tennessee history.

Posted by Jay Henderson at 2:54 PM No comments:

While looking around the Web for old pictures, I ran across this shot of a Conestoga wagon with a team hitched up (click on the image to see a larger view):

This picture demonstrates several features of the Conestoga wagon. It clearly shows the "swaybacked" shape of the wagon, which has a floor that has a slight curve with its lowest point in the center. This shape helped to ensure that if the rigors of colonial-era roads jarred the cargo, it would tend to slide towards the center of the wagon, maintaining balance.

Note also that there is no seat on the wagon; the driver is mounted on one of the horses. There is a passenger seated on the side of the wagon, between the wheels.

The term "Conestoga" is sometimes used incorrectly to describe the covered wagons or "prairie schooners" used to traverse the Great Plains as the nation moved west. While some Conestogas went west, most of the prairie schooners were less-expensive flat-bottomed wagons which usually had seating built into the front of the wagon. The craft pictured below is a flat-bottomed covered wagon, not a Conestoga; note the variety of transportation animals in this picture - - the wagon is drawn by a mule and two oxen, and to the left is a rider on a burro:

Posted by Jay Henderson at 2:46 PM No comments:

The town of Abingdon in Washington County, Virginia, grew up around an early settlement called Wolf Hill. In the early Backcountry, Abingdon was a crossroads, with settlers and traders coming down the Great Road and moving by the same road to Tennessee, or by the Wilderness Road to Kentucky. Some of the log cabins built during those early times have survived and several are now now located within the Abingdon town limits.

The style of log-cabin building found in Washington County differs from that ordinarily found in the log structures of Tazewell County, many of which are preserved at the Crab Orchard Museum. Washington County cabins were built with rafter roof systems, rather than purlins, and the builders used rough-cut limestone for chimneys and foundations - - both indicating a greater availability of skilled carpenters and masons.

Posted by Jay Henderson at 2:36 PM No comments:

This is how the advertisement describes the wares:

The gorgeous autumnal colorings of this quaint hand-turned pottery from the “Hill Country” of Carolina makes it readily adaptable to home decoration. The cool dark green or the warm sunset tones blend charmingly with late summer and early autumn flowers. Several of the pieces shown will also make delightful lamp bases. 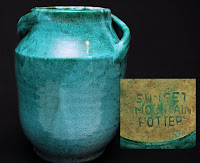 described as "orange reds with darker markings" must have been the chrome-red glaze which was very popular during the Depression years and remains a favorite of modern collectors. The "dark green with darker markings" may be the same as the green and black glaze described in the 1932 Cole Pottery Catalog. Many more shapes and colors were added to the Sunset Mountain Pottery line over the years.

The Treasure Chest and another mountain crafts business, Log Cabin, were combined and incorporated in 1932 as Three Mountaineers, Inc. The business eventually came to focus on wooden furniture and other wooden articles. The Sunset Mountain Pottery line was discontinued in 1935.

Posted by Jay Henderson at 2:25 PM No comments: